Last night with their protester march, Occupy Cincinnati occupied at Fountain Square. Police originally told protesters if they did not leave at 1:00AM they would be arrested. Some choose to walk around.

Come 4-5:00AM, police asked the protesters marching on the sidewalks to lower the noise, and 10 protesters remained in the park, ignoring officers' request to leave.

The police eventually chose not to arrest anyone. At 6:00AM the protesters reassembled at the Square, then proceeded to Garfield Square. 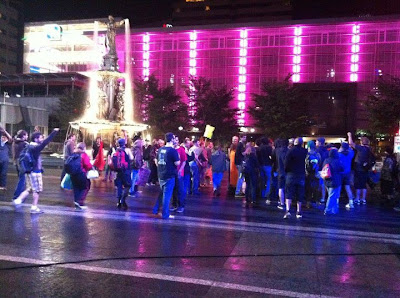 Cincinnati Residents Occupied Fountain Square Throughout The Night Successfully Avoiding Arrest
CINCINNATI, OH--  From the late night hours of October 8th through the early morning hours of October 9th, a group of over 50 people continuously supported the occupation of Fountain Square in downtown Cincinnati.  At 1:00 AM October 9th, the legal permit secured by the members of Occupy Cincinnati to use the Fountain Square park expired.
Organizers were originally informed by police that if Occupy Cincinnati members did not evacuate the square at that time, they would be subject to arrest. At around 9:00 PM on the 8th, the Cincinnati police met with a small group of organizers to explain that no arrests would occur until 3:00 AM on the 9th, the posted time that the park actually closes. The Cincinnati police also informed the group that it was permissible to sleep in cars parked in legal parking spots and circulate the park by marching on the public sidewalks.
At around 2:00 AM approximately 75 people maintained their presence on the square in support of the occupation. A live stream was set up to provide real-time feedback from the square. Power and Wi-Fi access remained available. Police cars and vans lined up along adjacent streets preparing for possible arrests around 3:00 AM.
At 3:00 AM, the Cincinnati Police Department issued orders to disburse the approximately 85 protesters, most of whom were seated in solidarity near the middle of the square. Most protesters moved to the sidewalk to avoid arrest, but 10 remained. These 10 moved to the fountain about 3:30 AM and have occupied since then. They have refused to leave despite police requests.
Around 5:00 AM 10 people continued to occupy Fountain Square while a cleaning crew using power washers cleaned the square. Police presence grew on the square, and the occupiers were asked to leave.  The remaining group continued to show their support and solidarity by marching and chanting from the sidewalk surrounding the park.
Marchers on the sidewalk were informed around 4:00 AM by the Cincinnati Police that due to a city ordinance regarding sound restrictions at certain hours of the day that they needed to reduce the noise level.
While eight brave individuals maintained their occupation of Fountain Square, police chose not arrest anyone. Occupy Cincinnati maintained a peaceful protest and the Cincinnati Police Department was very professional and respectful to all individuals that occupied throughout the night.
Around 6:00 AM all marching protesters rejoined the ten individuals on Fountain Square.
The Occupy Cincinnati group is asserting the following unalienable rights regarding the right to free speech:
The right to free speech should not be limited to certain hours of the day.
Public property paid for by public taxes should not be unavailable to the public at any time of day.
At 6:00 AM protesters then marched to Garfield square. Breakfast was served around 7:00 AM. A general assembly is scheduled for 2:00 PM October 9th in Garfield Park.