The live stream for Occupy Boston is showing tons of police, and protesters from an angle. It's hard to tell what is happening clearly, however many are reporting that the cops are beating on the protesters. Some are saying they are tearing down tents. 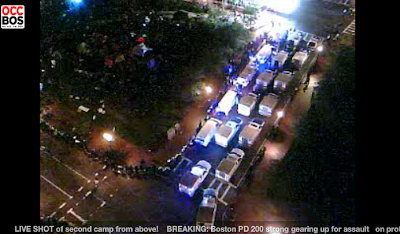 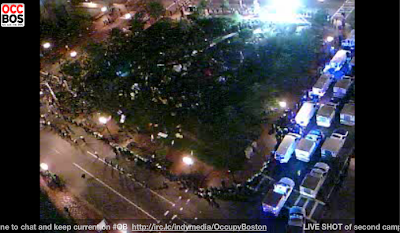 1:58AM(EST): A picture from the ground. You can hear the protesters in the background. 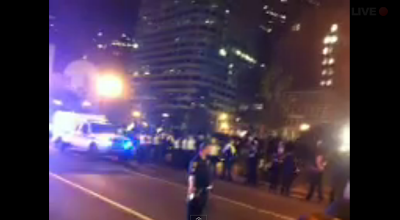 2:02AM(EST): Tons of arrests reported, and also the camera operator has witnessed arrest. Outside the second camp he remains, he's been standing there watching the Boston transit and state police clear off the camp. There appears to be no protests left, and protesters have been drove away in the paddy wagons, says the camera operator.

2:07AM(EST): Two protesters have been appearing to argue within the camera operator's hearing range. It's not clear what they are continuing to say, but from what I gathered one told the other to go say "arrest me" to the cop's face. Some parts of the video were dropping out. I assume they walked away, because they faded out.

The police have also either ordered, or the sanitation department is throwing away all the protesters' signs, tents, and other possible items. 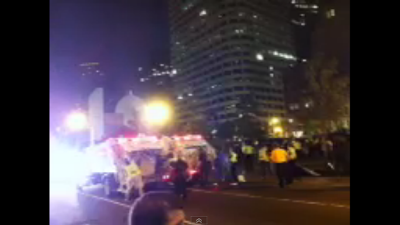 2:23AM(EST): A video on the ground of Boston Police saying to leave because they are found to be trespassing, and unlawful assembly. Police then continue to arrest. One person is saying the owner of the park authorized Occupy Boston to camp in both sites, but this cannot yet be confirmed.

Camp site 1 appears to not be bothered so far.

4:35AM(EST): Things have appeared to have been settling down. The Police have also cleared the other camp.

5:56AM(EST): 1 incident of believed police brutality, but cannot yet be confirmed. Around 100 to believed arrested. A person (unknown) has reported that the police are taking any items used to record the protest.