Title edited for update  / conclusion below.

During a march on Wall St., the New York Police Department is reportedly preparing to make more arrests according to the live stream provided by Global Revolution.

The protesters are preparing for the event by relaying messages to each other about what they are going to do, stay calm, and record as much as possible. Reports of buses being sent in. 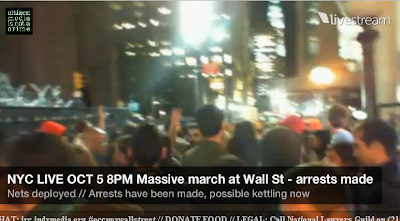 One from another camera away. 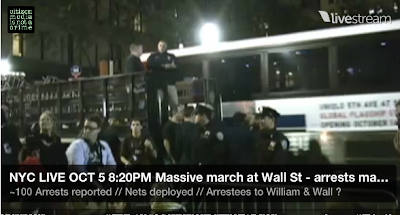 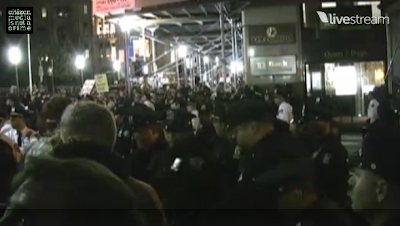 Update: Some decided to march away back to Liberty Plaza. Police have not appeared to stop or corner them.

According to someone on the live stream, NYPD may have arrested one or two people, hit some with a baton, and maced some. It's unclear how many.

Update 10:52PM Oct 5.: The NYPD is currently attempting to catch and arrest as many protesters as possible. They are cornering them in, through various methods. It is unclear what the protesters are doing. The NYPD has been ordering the protesters to get on the sidewalk. Reports and videos are also coming in of police brutality. There has been a reported 20+ arrests, but there are no confirmations as of yet.

Update 11:30PM: An Occupy Wall St. media team member has been arrested. Nothing else was added.